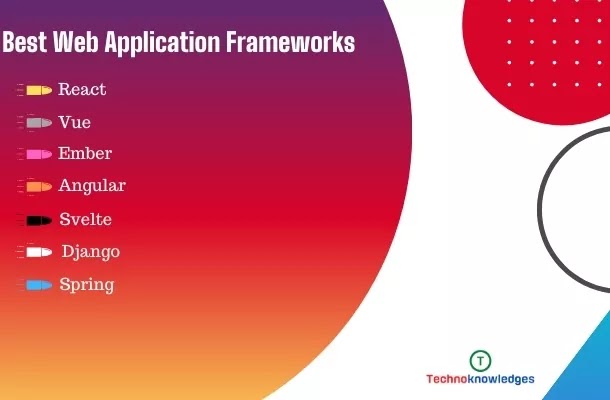 The evolution of application development has led front-end development frameworks to come into force.

These web application frameworks work for the layout, logic, and application is executed while its browser-based systems require JavaScript, CSS, HTML, and other web-standard technologies.

So, do you want to know which framework is best for you?

Devaki Technologies[D1]  has listed the most popular web frameworks-

React meets the important needs of the most demanding apps. It delivers applications that can run massive web apps.

React is also part of React Native, a framework that developers can use to build native applications that run on the iOS and Android mobile operating systems.

Weighed 20kb, Vue, this is one of the most lightweight frameworks on the list. Vue is used to build templates and components.

To learn, Vue is an excellent framework and acts as a smart alternative to angular.

Released in 2011, Ember was one of the younger frameworks.  It helps to build complex web applications and is a support for HTML5.

At present, Ember is used for huge and popular applications like Apple Music, LinkedIn, and Square.

Solutions that are built with Ember can be converted into native apps.

Initially developed by Google in 2010, Angular was released as an open-source project. It owns stronger developer support and continuously evolves to meet the needs of web developers.

Angular is also a major component of the MEAN development stack that includes MongoDB, ExpressJS, Angular, and NodeJS.

The current release is version 9.1

Svelte, an anti-framework was released in 2016. Its major goal is to reduce the challenges of some traditional frameworks. It can build tiny apps. Svelte offers an interesting route to Web app development.

A combination of front-end, back-end, and accelerators will give the best application frameworks.

Django is one of the many popular open-source Python frameworks.  The simplicity of Python syntax makes it easy programming languages in the world.

But the first preference of web developers is Django as the best framework for web development. It is because of its modern and holistic approach towards problem-solving methods.

Do you want to go to the Java route? Then, Spring is a popular web framework specialized in Java programming. It helps code back-end programs efficiently.

The Java-based apps built using this framework are robust, fast, and portable.

The mobile-first strategy holds an apt role in web development for better results and a web app for faster loading websites. It keeps the feel of the web lively and helps to extend your website to mobile devices.

For businesses to have a strong online presence, a website with the most popular web development technologies marks great importance. With the continuous evolution of the internet & the digital world, there is a research scope in the future.

Hope you have enjoyed reading our article about Web Application Frameworks. Contact us or share your thoughts on our social media channels to know more about our Web App Services.

5 things to note when hiring a website design company

Importance of web page layout to your eCommerce website in 2021