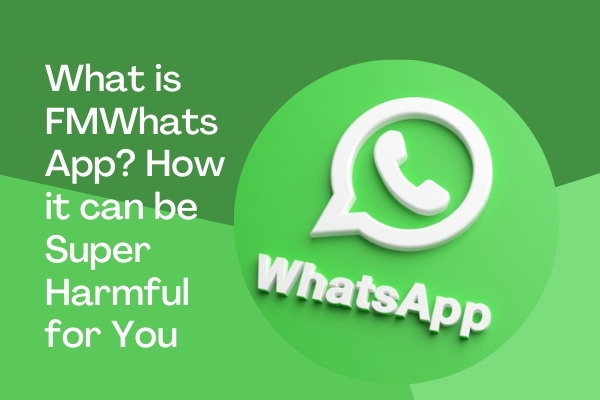 We will discuss here what is FMWhatsapp and why you should neither download it nor install it on your phone. Nowadays there is a competition to download APK files and especially in the younger generation.

WhatsApp is the world’s most popular multimedia instant messaging app. In India alone, WhatsApp is used by approximately 55 crore people. If we talk about the whole world, then this figure will go above 100 crores.

Every day, various types of messages are sent and received via WhatsApp like chats, videos, photos, audio, etc.

Third-party sources are referred to as such in technical parlance, and downloading any app from these sources is always risky. Now, a new version of WhatsApp is going viral, and people are installing it on their phones via a third-party source or an apk file.

FMWhatsApp is the name of this new version, but it is extremely dangerous for you. Please explain why and how to avoid it.

What exactly is FMWhatsApp?

The first thing you should know is that this mod or modified version of WhatsApp is called FMWhatsApp. The app was developed by Foud Apps and the latest version of the app is 8.93 which is released in 2021.

There are other customization options also and unlike the original Whatsapp FMWhatsapp lets you send messages to numbers that are not saved on your phone.

This app is being downloaded from APK or any third-party source. It is also claimed that FMWhatsApp can read deleted WhatsApp messages.

FMWhatsApp is currently only available for Android users, and this phone can completely control your smartphone and do all of your phone’s work without your permission. This app is also capable of draining your bank account.

Kaspersky has issued a warning about this modified version of WhatsApp FMWhatsApp 16.80.0. There are some features in this app that are not available in the original app.

FMWhastApp, according to Kaspersky, contains the Trojan Triada and is accompanied by an Advertising Software Development Kit (SDK). They work together to collect the device ID, subscriber ID, MAC address, and other information from the user’s phone and send it to the developer’s remote server.

Both of these malware read your messages, view photos and videos in the gallery, and monitor the chatting of other apps. They will also show you irrelevant advertisements in which money is collected from people. By activating the paid service on your phone, they can both make money disappear from your bank account.

In the end, all we would say is be careful and be alert. Download the WhatsApp application from the official Play Store and App Store. Do not download your WhatsApp or any other app from any other source. This can cause damage to your phone as well as leak your sensitive data, due to which you may suffer mental or financial loss.